All Ceylon Human Rights Federation totally condemns the gross human rights violation and inhuman, cowardly act on Easter Sunday, 21st April, 2019, in Sri Lanka, killing more than 300 people and injuring over 500, unarmed, innocent people, while they were praying in the churches.

The mankind has been evolving through civilization process, since the beginning of life, on Earth. Contemporary world, where human beings are exposed to wisdom, is experiencing miracles as achievements, with the technological advancements, and they become so civilized to recognize most of the values of human beings and accept that all human beings are born equal in dignity and rights and entitled to all rights and freedom.

Nevertheless, acts of this nature are becoming the order of the day and increasing day by day. Yet, despite of international instruments to safeguard rights, extensive discriminations and violation, are taken place in magnitude. Such situations demand, a New World Order, and urge the need of setting out a new agenda, in order to combat International Terrorism. Measures must be set in place to identify the culprit and deactivate its ugly head.

All Ceylon Human Rights Federation is committed to reaffirming its faith in fundamental human rights and the dignity and worth of human person; irrespective of cast, creed, religion and race. Our plea goes out to every nation in the world at this hour for solidarity, in making our planet, a better place to live. 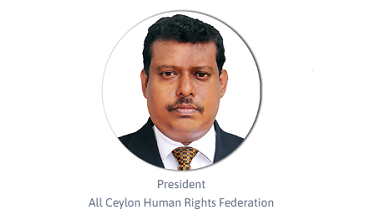